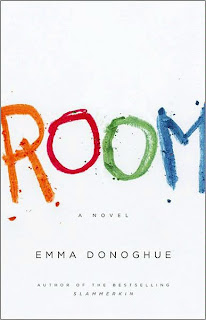 Barnes and Noble's Description:
Written by: Emma Donoghue
Description: To five-year-old Jack, Room is the entire world. It is where he was born and grew up; it's where he lives with his Ma as they learn and read and eat and sleep and play. At night, his Ma shuts him safely in the wardrobe, where he is meant to be asleep when Old Nick visits.
Room is home to Jack, but to Ma, it is the prison where Old Nick has held her captive for seven years. Through determination, ingenuity, and fierce motherly love, Ma has created a life for Jack. But she knows it's not enough...not for her or for him. She devises a bold escape plan, one that relies on her young son's bravery and a lot of luck. What she does not realize is just how unprepared she is for the plan to actually work.
Told entirely in the language of the energetic, pragmatic five-year-old Jack, ROOM is a celebration of resilience and the limitless bond between parent and child, a brilliantly executed novel about what it means to journey from one world to another.
My Thoughts: There are a couple reasons I read this book. The first being because my older sister had said it was one of the best books she read in 2010. As I started to read I honestly felt very depressed and almost put it down but then as always I continued to power through. I ended up really loving the story and would actually say I'd read it again sometime. There aren't many books like this that I would re-read necessarily but once I got into it I enjoyed it. I was annoyed at times with the five year old narration but was able to get through that easily. I wouldn't really say it's a ''light'' book but it is certainly enjoyable.