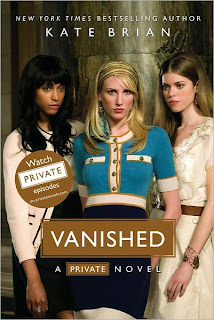 Against all odds, Reed Brennan re-established Billings as an underground literary society. She and the new initiates created a glamorous secret headquarters and were ready to show Easton Academy that even though Billings House is gone, the Billings Girls are stronger than ever. But before Reed had a chance to revel in her success, something horrible happened:
Noelle disappeared.
Now Reed has no idea who wants to hurt Noelle or why, but it's up to Reed to save her. As the clues build up, the clock ticks down, and Reed fears that unless she finds Noelle soon, she'll lose her friend forever....
My Thoughts: It's going to be hard to review this book without giving too much away. I am a big fan of the Private series so I was excited to read this one. I have to say it's among my favorite in the series. I am a little disappointed the whole supernatural thing is being brought in but I feel like I'll be able to over look that (hopefully). Ready to read Ominous now, just have to get it!