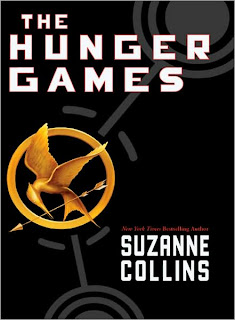 Barnes and Noble's Description:
Written by: Suzanne Collins
Description: In the ruins of a place once known as North America lies the nation of Panem, a shining Capitol surrounded by twelve outlying districts. The Capitol is harsh and cruel and keeps the districts in line by forcing them all to send one boy and one girl between the ages of twelve and eighteen to participate in the annual Hunger Games, a fight to the death on live TV. Sixteen-year-old Katniss Everdeen, who lives alone with her mother and younger sister, regards it as a death sentence when she is forced to represent her district in the Games. But Katniss has been close to dead before-and survival.
My Thoughts: When I first started this book I'll admit I was totally confused and didn't know that I would continue. I guess it was after the third chapter I really got into it. The book did move quickly for me after the first three chapters and I found myself not able to stop reading. Just like with Percy Jackson, I look forward to the other books in the series.
My Grade: A
Posted by Morgs1499 at 8:27 AM