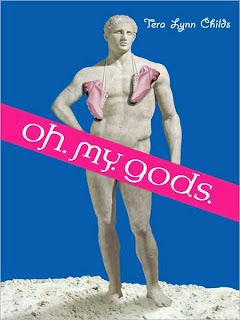 Written by:  Tara Lynn Childs
Description:
When Phoebe’s mom returns from Greece with a new husband and plans to move to an island in the Aegean Sea, Phoebe’s well-plotted senior year becomes ancient history. Now, instead of enjoying a triumphant track season and planning for college with her best friends, Phoebe is trying to keep her head above water at the überexclusive Academy. If it isn’t hard enough being the new kid in school, Phoebe’s classmates are all descendents of the Greek gods! When you’re running against teammates with superpowers, dealing with a stepsister from Hades, and nursing a crush on a boy who is quite literally a god, the drama takes on mythic proportions!
My Thoughts: I thought this one was very cute as well. Though it drug on a bit for me basically it was enjoyable (I think I was just busy while I was reading it). The story line is cute and you can't help but love Phoebe. I think as far as characters in books go, I probably relate the most to Phoebe. She of course is an athlete (like myself) and has a determination to be successful. I definitely recommend this book for anyone who wants a light-hearted and quick read!
My Grade: A
Posted by Morgs1499 at 11:04 AM