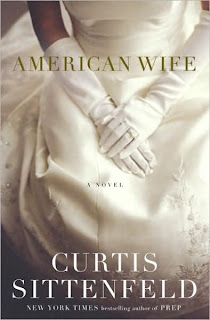 Barnes and Noble's Description:
Written by: Curtis Sittenfeld
Description:
On what might become one of the most significant days in her husband s presidency, Alice Blackwell considers the strange and unlikely path that has led her to the White House and the repercussions of a life lived, as she puts it, almost in opposition to itself. A kind, bookish only child born in the 1940s, Alice learned the virtues of politeness early on from her stolid parents and small Wisconsin hometown. But a tragic accident when she was seventeen shattered her identity and made her understand the fragility of life and the tenuousness of luck. So more than a decade later, when she met boisterous, charismatic Charlie Blackwell, she hardly gave him a second look: She was serious and thoughtful, and he would rather crack a joke than offer a real insight; he was the wealthy son of a bastion family of the Republican party, and she was a school librarian and registered Democrat. Comfortable in her quiet and unassuming life, she felt inured to his...
My Thoughts: I don't know how I feel about the book honestly. I have read Curtis Sittenfeld's other two books (Man of My Dreams and Prep) and had big expectations for this one. I won't say I was disappointed but I will say it wasn't really what I expected. I know it's gotten some criticism for ''attacking Laura Bush'' and I do not agree with that statement at all. I don't know, it just wasn't my favorite book I've ever read. Maybe I will try it again later, but not anytime soon.
My Grade: B-
Posted by Morgs1499 at 5:54 AM