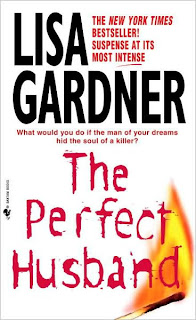 Barnes and Noble's Description:
Written by: Lisa Gardner
Description:
What would you do if the man of your dreams hides the soul of a killer?
Jim Beckett was everything she'd ever dreamed of...But two years after Tess married the decorated cop and bore his child, she helped put him behind bars for savagely murdering ten women. Even locked up in a maximum security prison, he vowed he would come after her and make her pay. Now the cunning killer has escaped—and the most dangerous game of all begins....
After a lifetime of fear, Tess will do something she's never done before. She's going to learn to protect her daughter and fight back, with the help of a burned-out ex-marine. As the largest manhunt four states have ever seen mobilizes to catch Beckett, the clock winds down to the terrifying reunion between husband and wife. And Tess knows that this time, her only choices are to kill—or be killed.
My Thoughts: This was my first Lisa Gardner. I've been wanting to read it for some time now and sort of kept forgetting about it. Though it had it's ups and downs (sometimes I was bored, other times I couldn't put it down) I actually enjoyed it. The flow of the book was good and there was just enough detail (not too much as I have often found with female authors). I found the story line interesting and different and really enjoyed it. I know it's a series so of course I will be reading others in the series I am sure.
My Grade: A
Posted by Morgs1499 at 2:09 PM