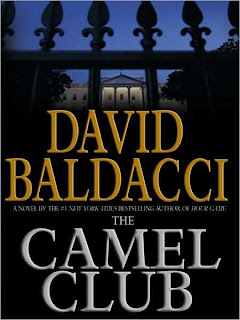 Barnes and Noble's Description:
Written by: David Baldacci
Description:
It exists at the fringes of Washington, D.C., has no power, and consists solely of four eccentric and downtrodden members whom society has forgotten. Their simple goal is to find the "truth" behind their country's actions.
One man leads this aging, ragtag crew. He has no known past and has taken the name "Oliver Stone." Day and night, Stone and his friends study wild conspiracy theories, current events, and the machinations of government, hoping to discover some truth that will hold America's leaders accountable to its citizens. Yet never in Stone's wildest nightmares could he imagine the conspiracy the Camel Club is about to uncover...
After witnessing a shocking murder, the Club is slammed headfirst into a plot that threatens the very security of the nation, full of stunning twists, high-stakes intrigue, and global gamesmanship rocketing to the Oval Office and beyond. Soon the Club must join forces with veteran Secret Service agent Alex Ford, who becomes an unwilling participant in one of the most chilling spectacles to ever take place on American soil. It's an event that may well be the catalyst for the long-threatened Armageddon between two different worlds, and all that stands in the way of this apocalypse are five unexpected heroes.
In The Camel Club, bestselling author David Baldacci paints a frighteningly vivid portrait of a world that could be our own very soon, and the few people who have a chance to stop the chaos...
David Baldacci is the author of ten previous consecutive New York Times bestsellers and #1 international bestsellers: Absolute Power, Total Control, The Winner, The Simple Truth, Saving Faith, Wish You Well, Last Man Standing, The Christmas Train, Split Second, and Hour Game, as well as his Freddy and the French Fries children's series. With his books published in over 35 languages in more than 80 countries, and with nearly 45 million copies in print worldwide, David Baldacci is one of the world's favorite storytellers. He's also the cofounder, with his wife, of the Wish You Well Foundation, a nonprofit organization dedicated to supporting literacy efforts across America.
My Thoughts: This one was recommended to me by my Mom. I will admit, I hated the first 70 pages. Seeing as it was highly recommended though, I refused to give up. After I started really getting into it (after the first 70 pages) I really liked it. There were still some boring parts for me but all in all not a bad read. The only thing I can say that is negative about it is keeping the characters straight. A couple of times I had to go back and figure out who was who. Other than that minor detail I really liked the action/suspense.
My Grade: A
Posted by Morgs1499 at 11:48 AM