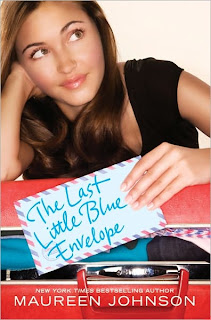 Barnes and Noble's Description:
Written by: Maureen Johnson
Description:
Ginny Blackstone thought that the biggest adventure of her life was behind her. She spent last summer traveling around Europe, following the tasks her aunt Peg laid out in a series of letters before she died. When someone stole Ginny's backpack—and the last little blue envelope inside—she resigned herself to never knowing how it was supposed to end.
Months later, a mysterious boy contacts Ginny from London, saying he's found her bag. Finally, Ginny can finish what she started. But instead of ending her journey, the last letter starts a new adventure—one filled with old friends, new loves, and once-in-a-lifetime experiences. Ginny finds she must hold on to her wits . . . and her heart. This time, there are no instructions.
My Thoughts: I am so happy I read the sequel to 13 Little Blue Envelopes. Though I don't know that I enjoyed this one as much as the first, I did like it. It was rather repetitive and Ginny seems to always get herself into interesting situations but all in all a good read. I really love the way Maureen Johnson writes. Somehow she seems to always suck me in whether it's a topic I like to read about or not...she's definitely one of my favorite Young Adult (yes I admit it I love them) authors.
My Grade: B+
Posted by Morgs1499 at 12:09 PM