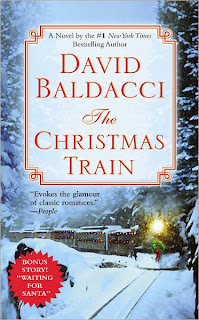 Barnes and Noble's Description:
Written by: David Baldacci
Description:
Disillusioned journalist Tom Langdon must get from Washington D.C. to L.A in time for Christmas. Forced to travel by train, he begins a journey of rude awakenings, thrilling adventures and holiday magic. He has no idea that the locomotives pulling him across America will actually take him into the rugged terrain of his own heart, as he rediscovers people's essential goodness and someone very special he believed he had lost. The Christmas Train is filled with memorable characters who have packed their bags with as much wisdom as mischief...and shows how wedoget second chances to fulfill our deepest hopes and dreams, especially during this season of miracles.

Tom Langdon, a weary and cash-strapped journalist, is banned from flying when a particularly thorough airport security search causes him to lose his cool. Now, he must take the train if he has any chance of arriving in Los Angeles in time for Christmas with his girlfriend. To finance the trip, he sells a story about a train ride taken during the Christmas season.
My Thoughts:
Okay...so this one was a roller coaster for me. I knew it wasn't going to be typical Baldacci but I really don't know how I feel about it. At times I really liked it (especially the surprise ending) but other times I couldn't wait to stop reading it, and almost gave up a few times, because I was bored. Not my favorite Baldacci but I guess it was a good enough Christmas story and made me want to ride a train.
My Grade: B-
Posted by Morgs1499 at 11:55 AM