Book 55: How I Learned to Love the Walrus 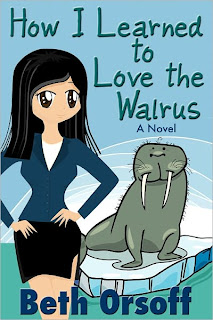 Barnes and Noble's Description:
Written by: Beth Orsoff
Description:
When Los Angeles publicist Sydney Green convinces her boss to let her produce a documentary for the Save the Walrus Foundation, the only one Sydney Green is interested in saving is herself. The walruses are merely a means to improving her career and her love life, and not necessarily in that order. Sydney would’ve killed the project the second she learned she’d be the one having to spend a month in rural Alaska if it had been for any other client. But for rising star and sometimes boyfriend Blake McKinley, no sacrifice is ever too great. Yet a funny thing happens on the way to the Arctic. A gregarious walrus pup, a cantankerous scientist, an Australian sex goddess, a Star Wars obsessed six-year-old, and friends and nemeses both past and present rock Sydney Green’s well-ordered world. Soon Sydney is forced to choose between doing what’s easy and doing what’s right.
My Thoughts: I am going to start my review by saying though the story was cute... it was way too long. I did read through it fairly fast but 700 pages? It could have been a lot shorter. I liked the idea of it and I liked the character of Sydney Green....oh yes I liked the walruses too. All in all it was okay for me but it's going to be a while before I can read 700 pages of ''romantic/comedy fluff'' again.
My Grade: B
Posted by Morgs1499 at 11:13 AM